If you have a heavy logging application, you might want to take into consideration to use the %-format strings for logging.
The Python logging module recommends to use the %-format.
But I guess most of the developers will prefer the f-string format, which came with the Python 3.6 release, because it simply easier to read.

My question was: Which impact does it have on performance? In case, we use logging with string concatenation.

So, I wrote a short script to “benchmark” it (and yes, I know it is not a proper benchmark).

Compared was: logging and concatenation with ‘+’ vs formatting with % vs f-strings, over multiple runs in a different order of the benchmark functions. So that, we can at least exclude the cold start issue. 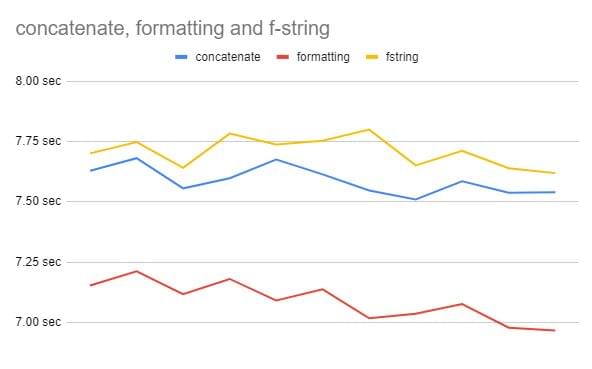 If we take an average of all measuring points and compare them with each other, we would come to the result:

One of the best practices is, to define a common style guideline. So that it would be much easier to understand a codebase when all the code in it, is in a consistent style. Specially if you are working in a team. PEP (Python Enhancement Proposals) provides a good starting point to define those style guide.

Here are some highlights which are mostly from PEP 8, but also from other best practices:

Avoid one letter variables like x and y (Except in very short code blocks). Give your variables and functions a meaningful name and use follow naming convention:

There are a lot of well known extensions like GitLens, Prettier or ESLint, but I would like to show you less known but very helpful extensions.

ESP’s are great to give your sensors the possibility to extract the sensor data, because of the on-board WIFI chip, which can connect to your network.
Imagine you have multiple sensors, and you would like to access the measured data and show it in Home Assistant. You can either spin up a web server on your ESP and pull the data or send data from your ESP to your Home Assistant.

The advantage of the push strategy is power saving through deep sleep mode of ESP, which will be explained later.

In my case the + and - pin label was incorrect and I had to swap them. So that the orange wire is attached to + (and not -).

In my example, I will show you how to turn on/off lights by using Teckin Switches with help of IFTTT. The result in Home Assistant will like that: